Oysters, a fish called Spot and a foodie trip with Lorraine Eaton on the Eastern Shore

Jane got a call from her friend Lorraine who wondered if we’d like to do a trip north to Virginia’s Eastern Shore. The oyster season had begun and I was more than interested. You see Lorraine Eaton is the food writer for The states main newspaper, The Virginian Pilot, and has an encyclopedic knowledge of the culinary secrets of this glorious part of the world.

It took a millisecond to say “Yes!”

I’d first met Lorraine when she’d invited us to have a meal at her place with a group of women who shared her love of Italian food. We all brought food (potato pizza) and wine (Prosecco…of course!) and chatted away as if we’d known each other for ages…food does this! I discovered she’d published 2 recipe books and an extensive guide to the food of Virginia. There was so much to like about this clever woman.

So a few weeks later we hit the road.

Our goal was to explore the southern section of the Eastern Shore. Before we could reach the peninsula we had to cross  the Chesapeake Bay Bridge Tunnel. A 37 km (23m) engineering marvel that links the north to the south. 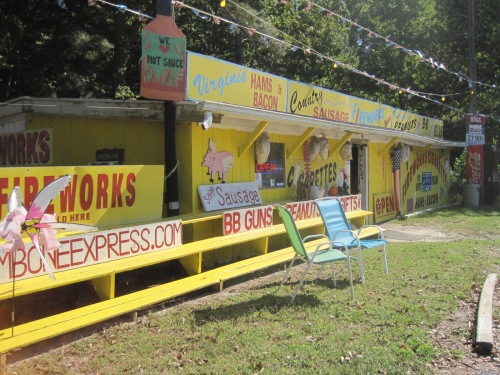 We’d taken the multi lane freeway, route 13, many times before but as we’d always been in a hurry we’d never bothered to stop. I’d seen many of these strange little yellow and red roadside shops and was curious about what they looked like inside. So we stopped…this one was a favourite of Lorraine’s.

And this is what we saw…real fireworks that appealed to my inner pyromaniac…(didn’t you always love Guy Fawkes night?). Fireworks have been banned in Australia for many years and I considered if there would be any possibility of getting them through customs!?

And I was surprised to see these utterly wrong cookie jars.

But did settle on these deep-fried peanuts…salty, crunchy and eaten with the shell on. Yum…great with a beer.

It wasn’t long before we got off route 13(hooray) and called into this lovely old museum, The Barrier Islands Center. Lorraine thought it would give a good overview of the history of the area. The Almshouse Farm at Machipongo was built in 1803 to provide housing for the poor, mainly white, people of the region and operated until 1954.

It’s one of those great ‘old school’ museums where the shelves a crammed with the real stuff…no audio visual screen presentations, just great displays and knowledgeable staff who are more than happy to take you on a personal tour. 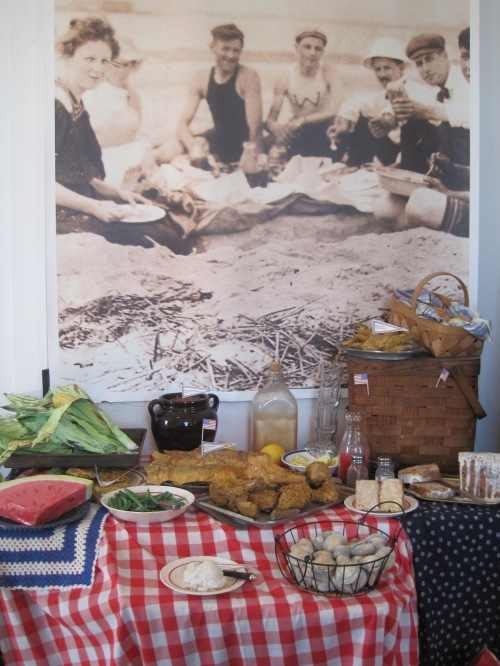 Many of the displays show what life was like on the now abandoned barrier islands of the ocean side Atlantic coast. These thriving islands were evacuated permanently after massive hurricanes flooded most of the arable lands in the 1930’s. Woolen bathing suit and clams anyone?

Or maybe this nifty flotation device if you leave your evacuation too late?!

And as I discovered, the human habitation of this fertile isthmus predated the 1606 English settlement by thousands of years. Some of these Native American arrow heads (washed up on beaches after storms) can be carbon dated to over 10,000 years.

Before we left we were told that the museum was going to specialize in the food history of the area…an abundant and fertile area that, as the arrow heads told, has been hunted, fished and farmed for a very long time.

As we walked back to the car I saw this white cross. Lorraine said it marked the mass burial ground of the Almshouse and I thought what a serene place to be laid to rest for those people who couldn’t afford a funeral or a tombstone. 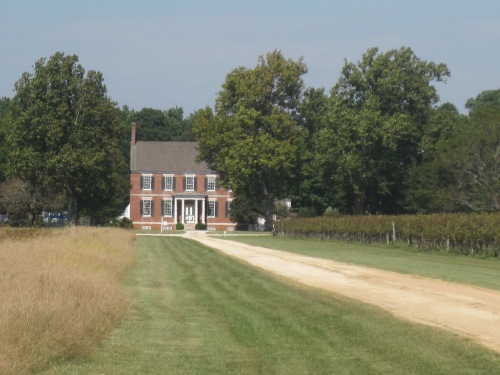 Wine grapes have been grown in Virginia for centuries and what foodie trip would be complete without a tasting of the local drop. A few kilometres down the road we stopped at Chatham Vineyards, the relatively new agricultural enterprise of a family who’ve been farming this land since 1640.

Inside we try their specialty, un-oaked Chardonnay, and all agree that this would be the perfect wine to drink with freshly shucked oysters. I buy 2 bottles! 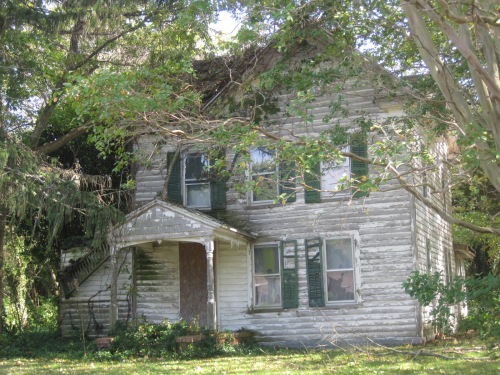 We continue deep into the woods, along back roads, past the hamlet of Franktown…

…to the oyster and crabshacks of these two fine watermen of the Chesapeake Bay, Tom (of Shooting Point Oysters)  and H.M.

“Why here?” I ask Lorraine.

“Because Tom owes me!” she replies with a mischievous grin. 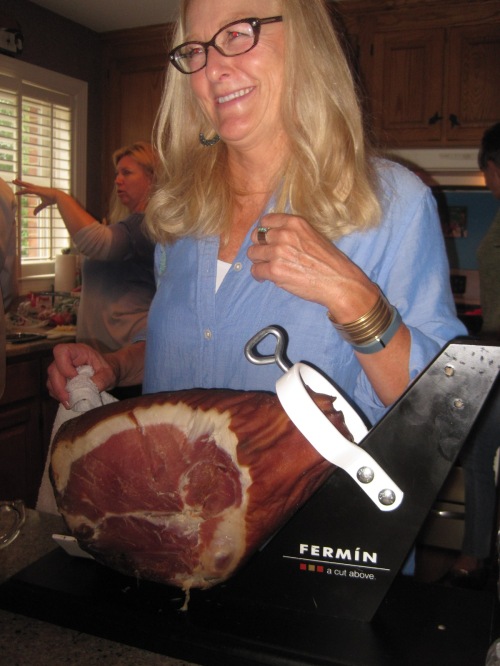 You see the multi-talented Ms. Eaton cures her own hams and every year she trades hams for goodies. Today she’s come to collect a bushell of oysters from Tom.

Tom has a film crew waiting for him to take them on a tour of his operation so H.M. volunteers to show us around (he’s a crabman) and as the softshell season is over he has a bit more time up his sleeve.

He takes us inside to show where the oysters were sorted and shucked. Lorraine tells me that there is footage of these men singing in time to the percussion of clattering shells and the rhythm of their physical work…what an extraordinary sight and sound this must have been!

Further along the shoreline we are directed to Toms place. 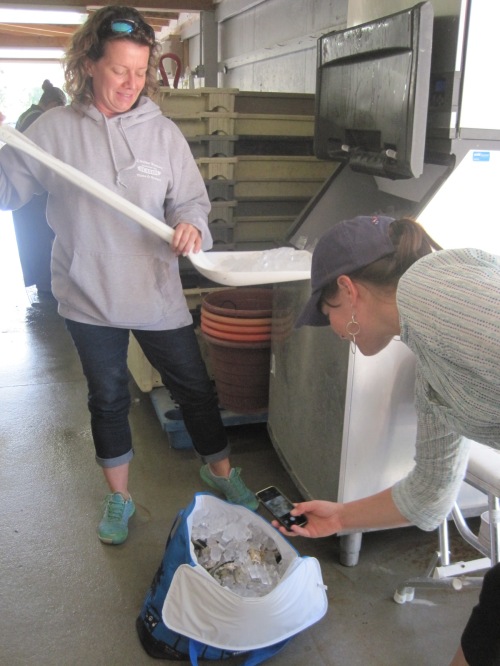 And drool as Toms wife, and business partner, Ann loads up our cool pack with Lorraine’s ham for oysters deal.

By now we’re starving and Lorraine wonders what we’d prefer…some contemporary restaurant on the water selling a modern interpretation of ‘Shore’ food or perhaps something a little more traditional?

“Traditional” we chorused. So off to the Exmore Diner we went.

What I saw was the real deal, an original diner, not some tricked up reproduction selling franchised fast food. 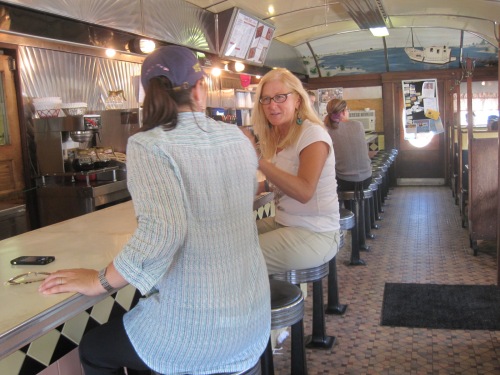 The interior, almost untouched since the 50’s, offered bar or booth seating…the bar afforded the best view of the place and its customers so we found a spot and looked over the menus.

While we waited I watched these women prepare the turnip tops that would be boiled with ham hocks to become ‘Greens’. The kitchens were a hive of activity with cooks at each station busily preparing food to supply the 300 plus customers that were expected each day. 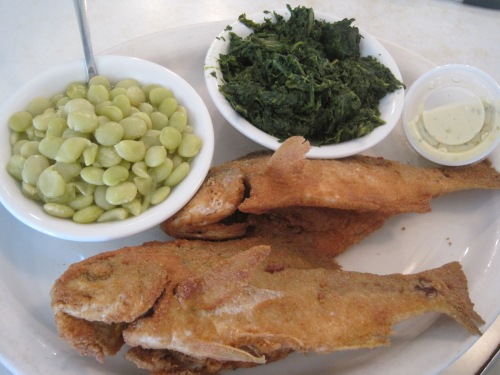 Lorraine ordered the Spot, a small fish cooked whole and a specialty of the area. Simply breaded and cooked whole, I stole a piece…delicious! 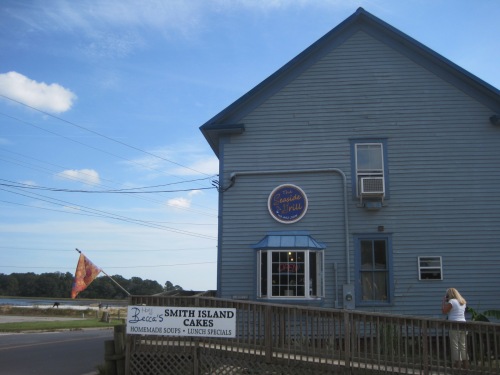 And as if that meal wasn’t enough we were directed, for dessert, to the Seaside Grill @ Willis Wharf where we’d heard the famous Smith Island cakes were being made. My curiosity was immediately aroused. The Smith Island layer cake was one of the first foods I’d discovered when I started researching my latest book.

And to my delight I got to meet the lovely Becca (left), a Tangier Island native, who has just moved her bakery from Onancock to  Pams newly acquired restaurant.

Sadly the traditional, 8 layer, buttercake and chocolate had sold out so I opted for the ‘Oreos and cream’, Lorraine tried the strawberry…I tried both! Again delicious but I was so full I could barely walk… somehow my jeans had shrunk in the last hour?!

Across from the Grill Lorraine pointed out a gorgeous old house and told me that when the islands were evacuated the locals put their houses on barges and shipped them to their new (safer) mainland locations.

It was time to return home, so we finished our drive along the prettier Seaside road that runs parallel to the busy route 13. 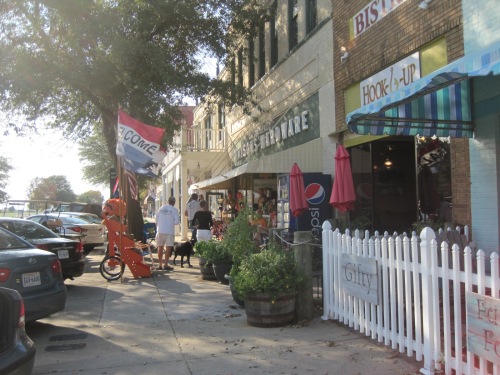 We had one last stop on the Eastern shore, the southern most port, Cape Charles. 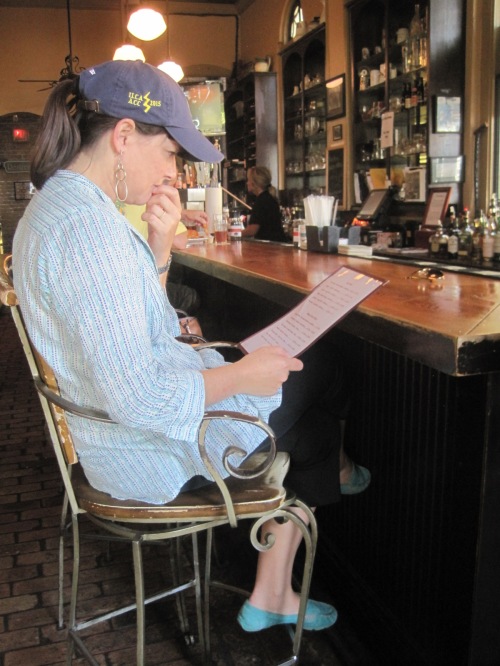 And we stopped at an old bank that had been converted to a pub. We ordered a glass of local wine and chatted enthusiastically about the things we’d seen and the people we’d met.  By 5pm we had to go, Lorraine had to attend her daughters music recital and we had a dinner date with Jane’s husband, my little brother-in-law Craig. 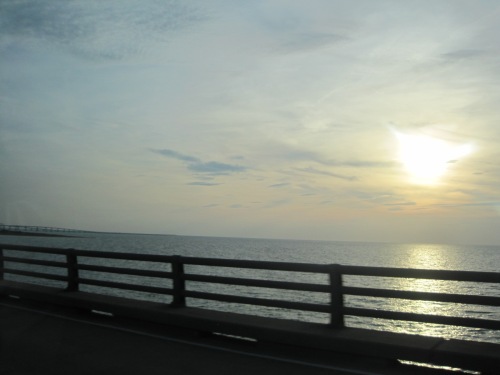 We returned to Norfolk, back along that mega bridge… 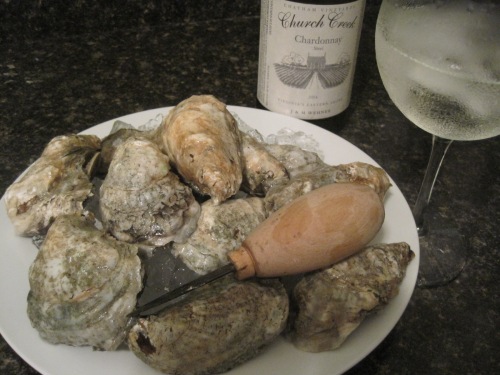 And home to a delicious dinner of those fresh oysters and the perfectly matched Chardonnay.

Thanks so much Lorraine, another brilliant day and almost my last in the wonderful State of Virginia. You can check out more of Lorraines writing and delicious adventures here.

No excuses now…my research is complete, home in a few days, ready to write…but very sad to leave!

2 Comments to “Oysters, a fish called Spot and a foodie trip with Lorraine Eaton on the Eastern Shore”