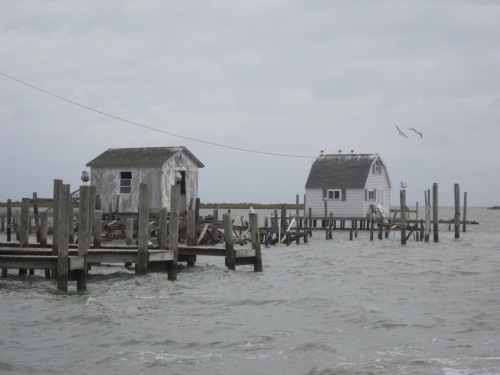 Tangier is a small sand island in the middle of the Chesapeake Bay, Virginia, on the east coast of America. My next book is set on a fictitious version of Tangier and researching it was the real reason for my trip to the States.

I’d read about Tangier in 2007. Bill Bryson mentioned in his book, The Mother Tongue,  the archaic Elizabethan dialect spoken by the inhabitants of the isolated Island. I’ve remained curious about how such a quaint anomaly can exist in a connected, modern world.

Tangier Island is famous for its soft shell crabs, oysters and striped bass. The fishermen who ply their trade there are called Watermen.

And sadly it’s also famous for being the island that is slowly disappearing into the sea. I felt a compulsion to see it before it was too late! 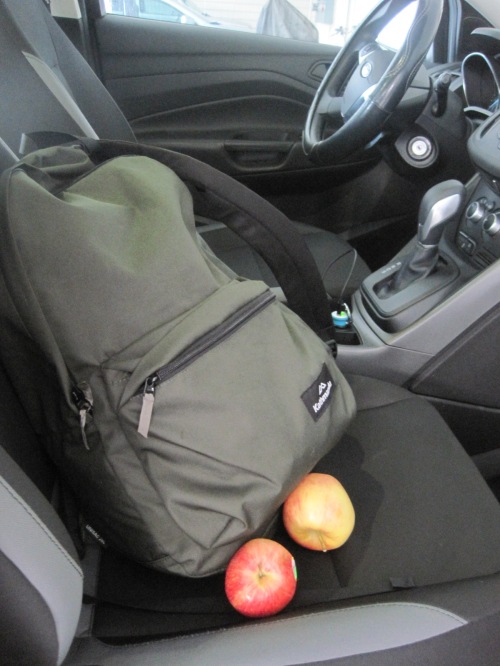 Jane had finished her season in the Hampton’s as a private chef. We’d been back in her hometown of Norfolk, Virginia, and after a week of chilling, catching up with friends, and re-acquainting with normality we were ready for another adventure.

Summer was almost over, rain threatened…not such a good day to be on a boat in the unpredictable Chesapeake Bay, but time was running out, the ferry service to the island was slowing down and I feared that if we didn’t go soon it would be too difficult to get to Tangier.

I didn’t know what would be available on the island so I loaded the pack with survival rations… a change of clothes, food and water…you never know?!

Jane spoke nicely to her Sat-Nav, our route was plotted and we hit the highway.  Today we were driving 1 1/2 hours north on Highway US13 to catch the ferry to Tangier Island.

We pulled off the highway, drove through picturesque green wooded countryside and found the charming town of Onancock. Jane had never been there and was delighted to discover a pretty little village, filled with antique stores and cafes, not so far from home.

There were beautifully restored old homes. 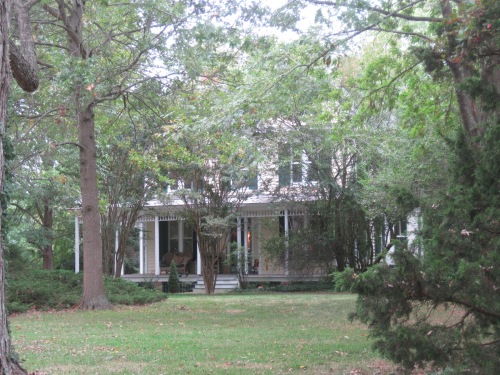 I later learned that Onancock was a place where senators and the movers and shakers of Washington have their Summer houses. 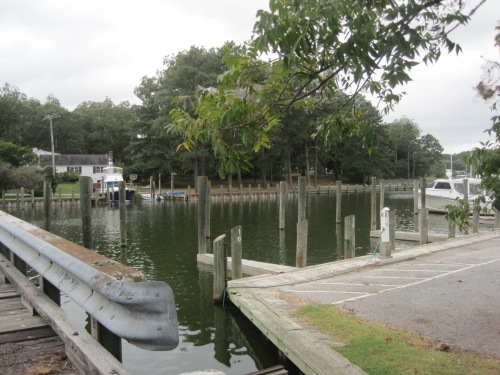 At the end of main street we found a quiet little marina.

And a nice, but very small, boat. I had expected a much larger ferry and was a little bit nervous about this vessels ability to make the rough, hour long trip across the bay. The notoriously dangerous currents and choppy seas are the main reason for the islands isolation.

We take a few brochures, looking for a map, find nothing and wonder how we’re going to make our way around Tangier…perhaps there will be a guide on the island?

Jane has worked on boats for years and grabs two seats near the wheelhouse…she tells me it’s the most stable part of the boat!

And I’m glad for this piece of knowledge as the seas are wild and the waves are drenching the seats on the stern…the same seats that seemed so pleasantly situated in the fresh air when we boarded. We are feeling very smug!

After an hour at on the water I’m glad to see Tangier and its rickety little crab shacks.

We pull into the pier and our Limo driver is there to greet us! Not really…bikes and golf carts are the main method of transport.

At the end of the dock a gaggle of golf carts are lined up to take us on a tour. We spend a massive $3 dollars and hop on. 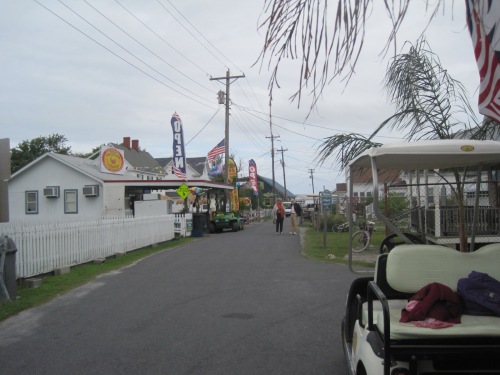 The streets are narrow and the houses tiny. The women of the town run the tours and talk in their lilting accents describing, proudly, the history and folklore of Tangier.

The island had been the seasonal hunting grounds of the Pocomoke Indians…apparently ancient arrow heads are exposed on the beach after a storm. The Island was sold by the Pocomoke in 1666 for the princely sum of two overcoats.

In 1686 a large strip of land was sold to John Crockett… interestingly the name of the Captain who brought us to the Island today. You see not much has changed since those times when families of the west country of England arrived all those years ago.

The Crockett’s, Park’s, Pruitt’s and Thomases are families that have been here for many generations and are names that still dominate the phone book. Along with the names, the accent of the early pioneers remains and it’s strange to hear the Elizabethan (1600) patois spoken by the older members of this community. Although since the introduction of satellite TV and the internet younger generations are influenced by a different tongue and I assume that this archaic dialect will soon be lost.

By 1840 a commercial fish market was established on the mainland. The Watermen could now trade, live a little less austerely and as a result the population of 79 people grew… increasing to 589 by 1880. Today Tangier is home to about 700 people.

We needn’t have worried about a map…there are two main strips of housing either side of this marshy sand island. The tour only takes 15 minutes. 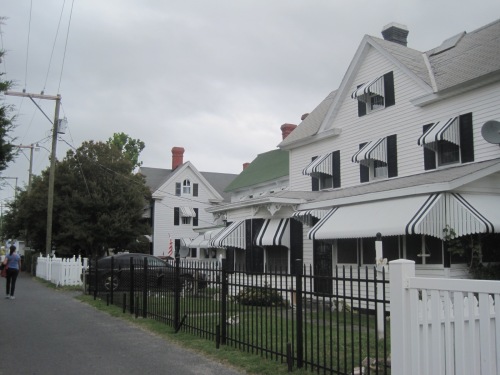 By the time we return to the quaint little main street Jane and I are hungry. We want to try some of the traditional foods. 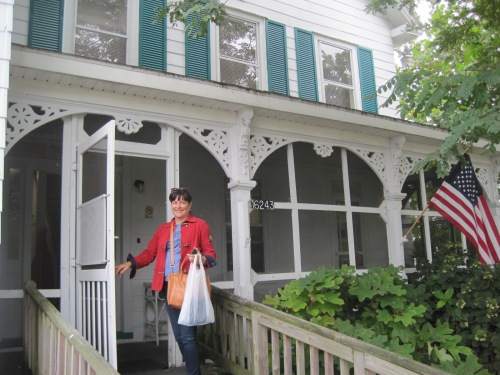 The sweet little country cottage is one of a few places that provide overnight accommodation on the island.

We are directed to the dining room and share a table with some of our fellow passengers. 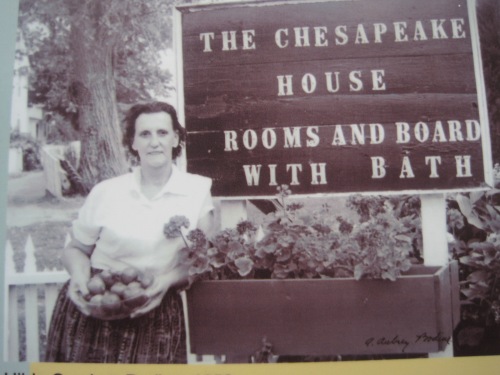 After lunch we visit the museum and see a photo of the young Hilda Crockett. 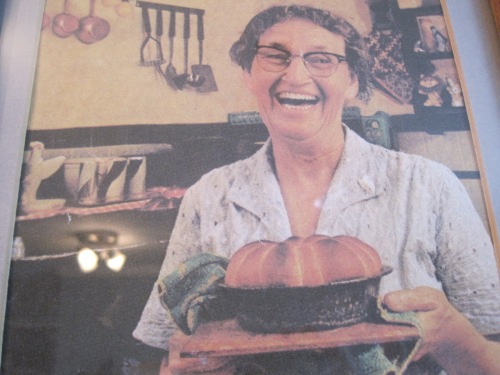 And another, colour this time, of Hilda and her famous pound cake.

I love this photo, taken in the 50’s, of one of the Watermen. 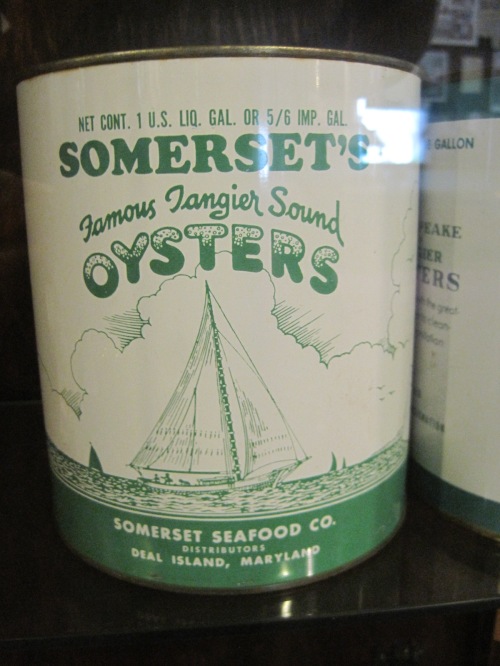 And I see the tins of oysters, crab meat and fish and discover that canning was a way to increase the life and profitability of the haul.

But I also discover strict new quotas on fishing means that it is now almost impossible to make a living from the meagre allowable catch. Sadly there will not be a single graduating student of the class of 2015 who will become a waterman. 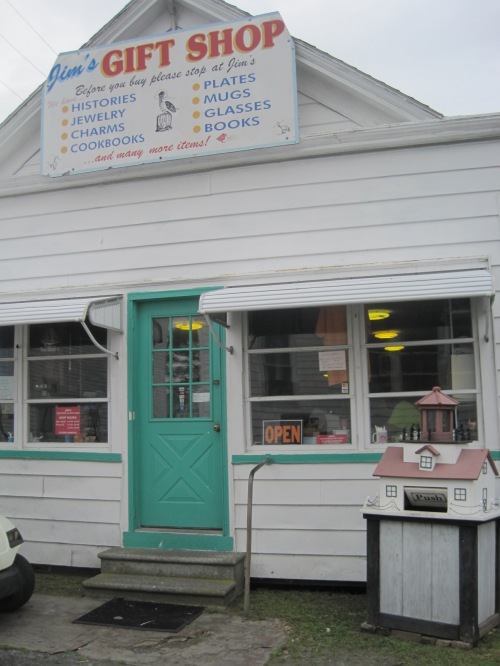 Tourism could be the economic salvation of this small community.

… and we hope that a little spend in each of the shops will be enough.

With a few hours to kill we set off on foot and explore the island more closely. This is one of the oldest houses on the island.

And this is not! But represents innovation and gives an accurate idea of the scale of the tiny houses.

Some of the properties are being bought and restored by holiday makers, but it’s a costly exercise as all building materials must be brought in by boat.

I learn that most of the houses are tiny transportables, brought in by barge and then manually pushed along the narrow streets to the vacant lot. 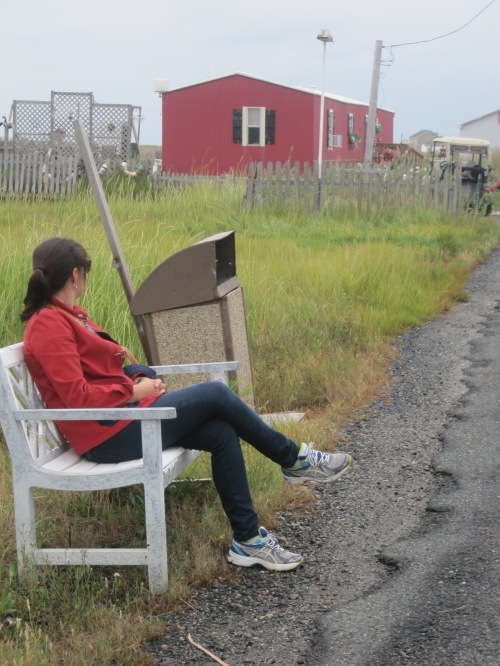 We walk to the far side of the Island.

A small white sandy beach reveals a mangled crab pot and I feel sad that the life of this industry may soon be over. What will the watermen do if they can no longer fish?

I see gravestones that tell stories of hardship and realise that life on this remote outpost has always been tough. The strange thing is that this tombstone was in the front yard of someones house. A woman tells me that this was the traditional way the dead were buried.

It wasn’t until the churches were built that cemeteries were established.

And now this has been reversed, as the graveyards are full, and people have returned to the tradition of burying their loved ones at home.

I can’t help but notice that even though it hasn’t rained there is water everywhere. I soon discover the real threat to Tangier…the water table is rising, the island is only a few feet above sea level, and after every high tide and major storm event thousands of tons of sand is washed away. The Island is slowly disappearing. 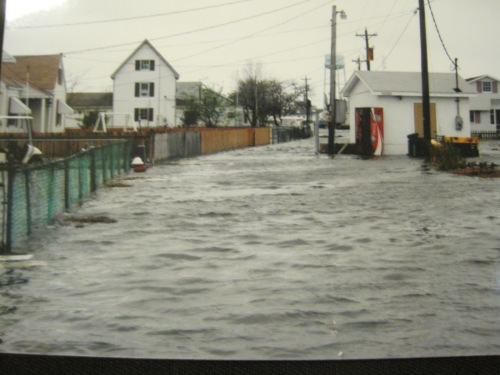 This photo shows extensive flooding which is becoming more common every year. 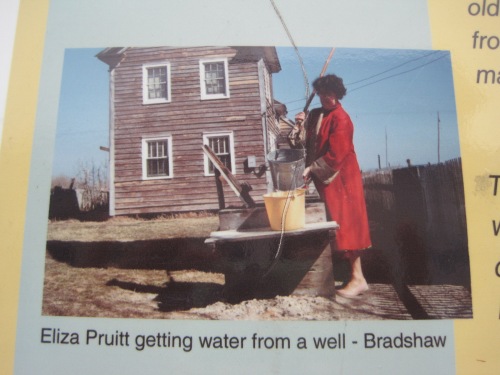 Yet, ironically, underground aquifers provide a plentiful supply of fresh drinking water…a reason why the island could sustain a population in the first place. 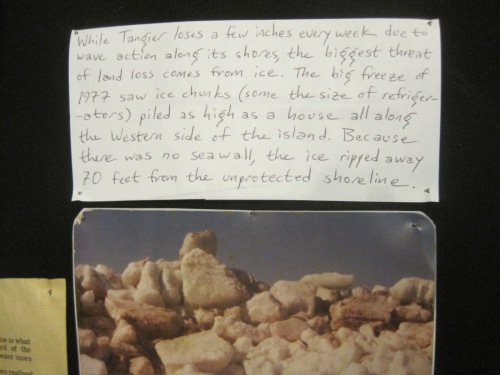 I learn that water, in the form of ice during severe winters, also hacks at the coast. In 1977, 70 feet of shoreline was ripped away. The locals are desperate for a sea wall to be built to protect what remains of this fragile sand island.

These narrow canals criss-cross the marshes.

The canals convey the watermen, in dingy’s, from the deeper waters of their sea bound crab shacks (where the fishing boats are moored and the catch is stored) to their canal front homes. I could just imagine the wives waiting anxiously for their husbands to return from long days in that treacherous sea. 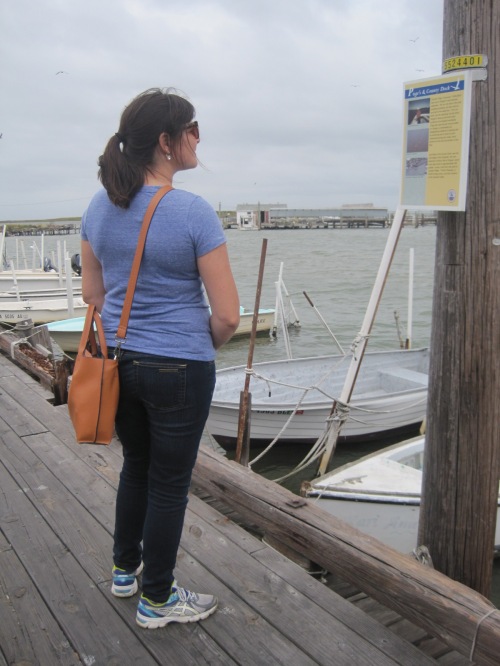 By 3pm it’s time for us to return. 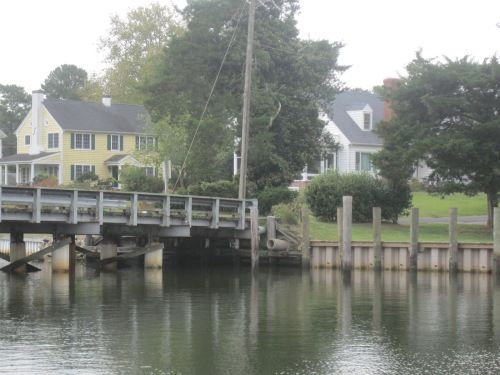 As we sail back into the Onancock marina and see the grand houses I wonder what the men of power, in their ivory towers, are doing to save the Island?

Tangier Island is magical, a place that time almost forgot… it inspired me to set my next book there. Mobile phones and internet only arrived in 2010, dragging it kicking and screaming into this century…to a world of quota’s, climate change and cheap imported seafood.

Without a seawall even the tourist industry won’t survive… support this wonderful small community and visit while you can!

Thanks for reading, Anna x

10 Comments to “The Disappearing Tangier Island.”