Kristin and I have been friends since our daughters were babies. The girls attended the same crèche. Kristin and I would often share an evening meal after a hectic day at work. She’d ring and say “I’ll pick up a roast chicken, you pick up the girls” We’d eat together and discuss which of the dramas of the day almost sent us over the edge….

Zoom forward a million years later and our lives have taken very different paths.Kristin has risen up the corporate ladder to spectacular heights and I’ve chosen a more sedentary life and become a writer. Our lives are so very different now but our friendship has endured.

We caught up at one of my readings last year. She said we should come up to her country property, spend the weekend together…cook, drink and reminisce, and last weekend that is exactly what we did. 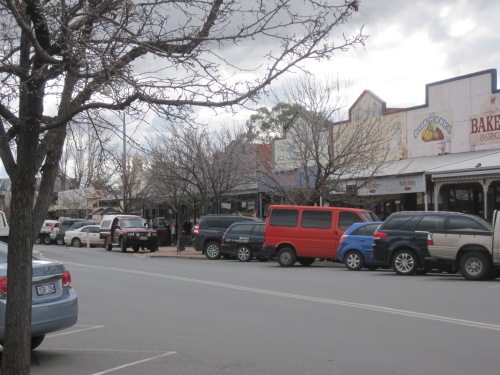 Kristin and her husband Aden would meet us in the lovely town of Euroa, an easy 2 hour drive north of Melbourne. Their house is off the grid and there is no phone, computer or GPS. We would meet in town then follow them out to their property, a further 20 minutes into the Strathbogie Ranges.

We met at a café, Fare Enough, in the main street. Aden introduced me to Bibby, the owner and she showed me the range of local produce she’d sourced. Plenty of yummy things for a jaded city escapee like me! We found a table, ordered the coffees and I began to think whether it would be possible to make a living selling bread to Bibby…just saying!? 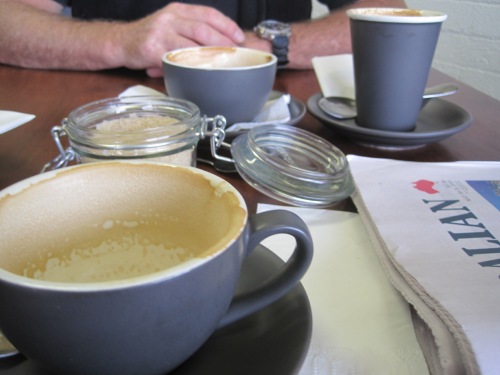 The coffees were great and we discussed what still needed to be purchased before we headed into the hills.

We didn’t need much as Aden and Kristin were generous hosts who’d thought of everything and already had a very full pantry. Although we did agree that no trip to Euroa would be complete without a visit to the bakery.

We bought cinnamon buns and vanilla slices, were now fully equipped and ready to escape to the hills. 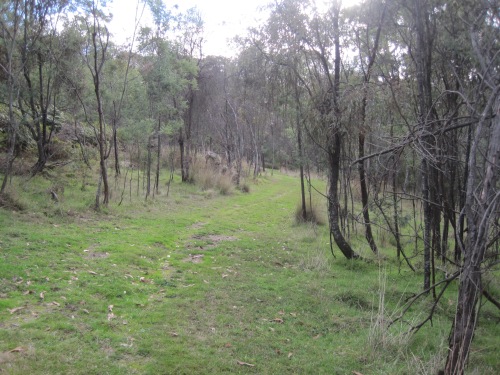 We followed Aden and Kristin along a good sealed road but as we got further along, it narrowed and I began to understand why they had an off-road vehicle…our little black German car didn’t seem quite robust enough for this rough bush track! After about twenty minutes we got to the gate, flipped the locks and drove into their property. 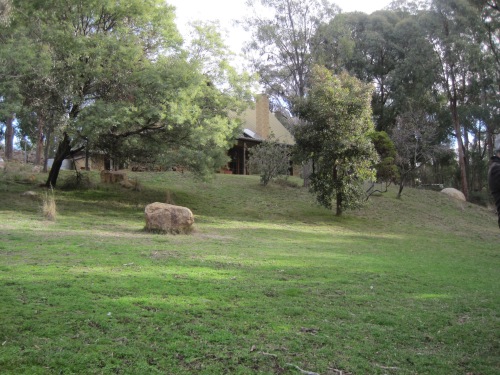 Soon the gorgeous little cottage came into view and I could begin to see what an escape from their high pressure city lifestyles this place must surely be. They’d purchased it from an 80 year old man who had done no maintenance. Kristin told me the house was so run down that the first year was like camping out. They have since done extensive renovations to turn it into a luxurious 2 bedroom getaway with all the creature comforts (the bedspreads are Armani, the cookware European!)… the ever stylish Kristin would have it no other way! 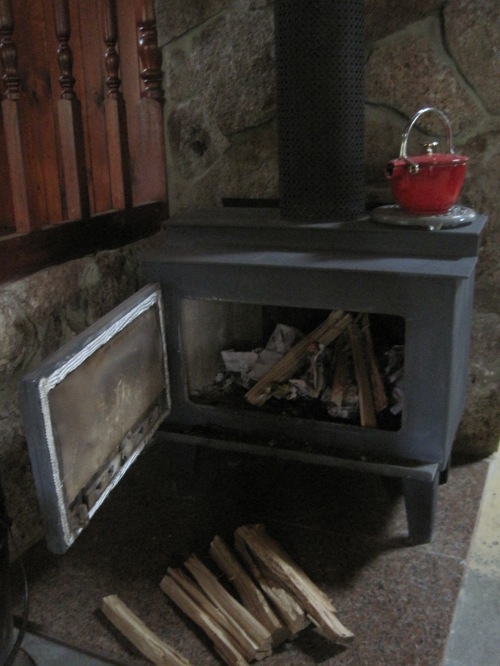 Winter was only a day away and it was freezing cold. Aden lit the fire and within a few minutes the dining room was toasty warm.

Lunch was a simple affair…local cheeses, meats, bread (from me) and yummy salad from Kristin’s vegetable garden.

By late afternoon the rain had cleared, and as tempting as it would have been to keep drinking by the fire, we decided a walk around the property was in order. In front of the house there are two terraced lawns that lead to the river. I could just imagine long summer lunches, sitting on the terrace, under this grand old gum tree.

As I mentioned these guys are off the grid and they showed us the spring fed dam that supplies them with an endless amount of water all year round. When it gets really hot they use the dam as a swimming pool (although on this freezing cold day I could barely comprehend the notion of plunging into its cold depths!).

We followed the river, deep into the bush, for another thirty minutes until we came to a clearing on the opposite bank.

“Come with me, you should see what we found hidden away on the boundary, ”

Within a few minutes we came across this ramshackle old hut. Of course we had to get a bit closer and before long we’d wriggled the latch and were in.

Inside we found a funny cobweb draped little room, with basic furniture, and a cupboard full of crockery…everything the modern camper would need!

There was even a pretty little lead-light window illuminating the back of the room. It was hardly the abandoned resort we found in the Daintree but I could imagine giving the place a clean and perhaps disappearing here for a few days when I needed a bit of quiet time… an extreme writers retreat next Summer… maybe?

We said good-bye to the shack and continued to follow the river.

Aden pointed out the wombat burrows, dug like multi-storey apartments, into the riverbank.

At the top of the property the big trees were slowly being replaced with weedy bracken scrub. A few metres away Kristen pointed out what she thought was a bit of a rubbish dump…a remnant from a time when people were less respectful of the bush. I was curious and made my way toward the chemical drums and trash. It suddenly dawned on me that this was no dump but something more like a scene from ‘Breaking Bad.’

There was a sink with a tap and a very peculiar battery driven dish washer.

But it was the metal flue, crumpled above a stove, and the large number of chemical drums that made me think this was probably all that was left of a very dodgy looking meth-lab. 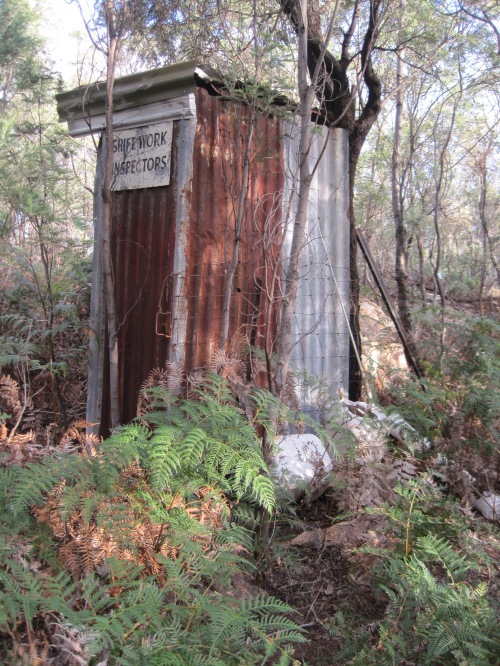 There was even a toilet to keep the ‘Chemists’ well looked after during a long ‘cook’… I have watched all episodes of ‘Breaking Bad’ which now makes me an expert on this illicit enterprise!? Aden and Kristin had owned the property for over three years, fenced it and locked the gates, so it was fair to assume that this weed infested den could no longer be accessed and that I needn’t fear a surprise visit by some drug addled crack heads! Nevertheless it freaked us out a bit and we all agreed it was getting late and time to open the bottle of Sancerre Aden had put on ice before we left! My thing is Italian wine and his is French…we hightailed it back to the cottage to start the tasting!

The smells coming from the kitchen were sensational. Kristin had a leg of lamb slow cooking in the oven for the last seven hours and it was now time to remove the meat and add the pears to the pan. This year her orchard was finally starting to produce and she picked her first crop of apples, lemons and pears. She prepared the pears by cutting the larger ones in half and the smaller ones left whole. An hour in the pan, while the meat rested, produced a perfect accompaniment …

to the succulent lamb. Yum, yum and an exciting new culinary find. Thanks Kristin!

Before we drank too much, and forgot to set the dough, I showed Kristin how to make the bread. She’d mentioned it was difficult to find really good bread and couldn’t believe it was possible to make a sourdough with such little effort!

That night we opened more bottles and had the kind of conversation only a wine soaked imagination could fuel . We began to speculate that maybe the ‘little old man’ they’d bought the property from may have used creative ways to fund his retirement…it was the wine talking…surely! But we dismissed the idea as he really was a lovely old guy who surely would never condone such behavior!?

By midnight the fire, the wine and the epic walk had made us weary and we all stumbled to our beds. I dreamed about Walter White, walking down the track…knocking on our door…I really must stop watching so much television!

It must have been the country air, but as an early bird, was surprised to wake and see that I’d slept till 9 am.

Kristin and I got the dough in the oven…she was still not convinced that the bubbly mass would turn into bread, while Aden fired up the espresso machine.

Mmm… off the grid yet still able to get a good coffee. Some things an inner city woman just can’t live without! 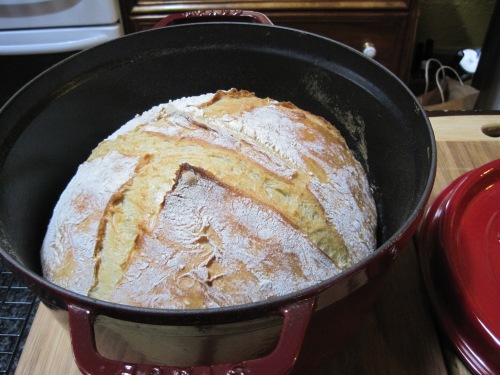 Then the oven did it’s job and the bread genies worked their magic and once again that recipe produced another perfect, golden loaf. Fresh butter and local honey…yum!

It was a dull and drizzly day so Aden thought it would be good to go for a bit of a tour of the area. About a twenty minute drive from their property we stopped at the tiny town of Ruffy. The school had closed, the streets were empty and the  café looked shut for winter. Aden smiled and said that this garden, under the oak trees, was a magical place to sit during summer. The food always delicious. To me it looked abandoned, but I followed him into the old shop… 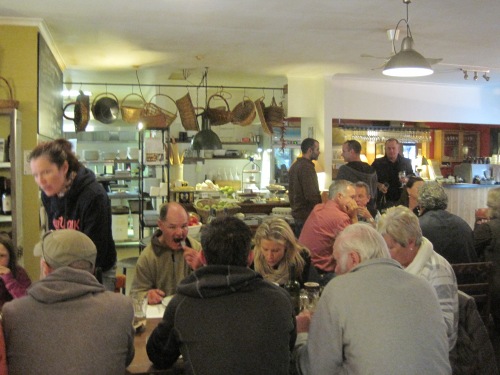 And found the Ruffy Produce Store buzzing with life, an open fire blazing and each table packed with happy diners. 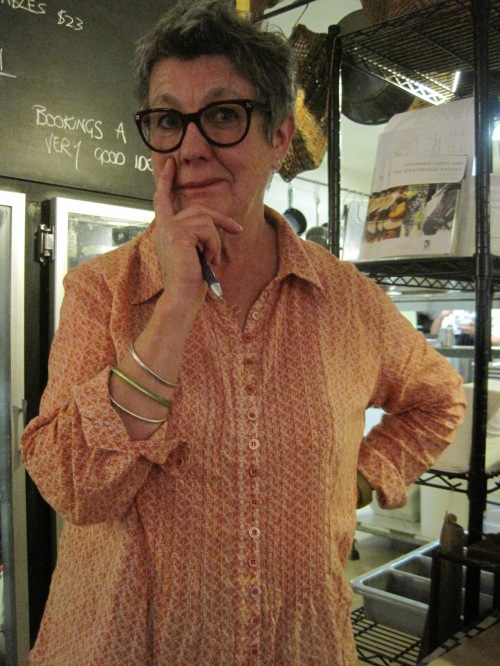 Aden introduced us to Helen, the owner, who found us a sneaky little table by the door…thanks Helen, I now know we really should’ve booked. 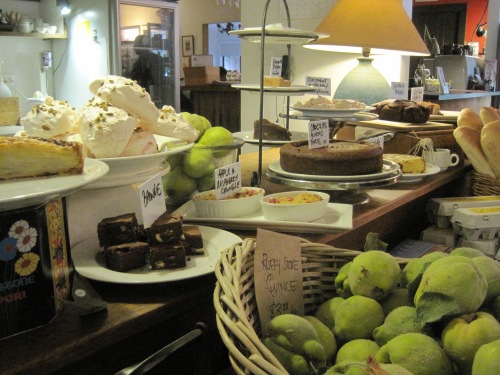 While our table ordered I took a look around the store and discovered this bench loaded with very sweet temptations and fridges filled with produce from the local area.

As we’d only just finished breakfast we weren’t that hungry so we ordered the ploughman’s lunch and a bottle of the local Riesling. Note to self..next time we visit, don’t have breakfast!

Somehow that quick stop turned into a very long lunch. I looked at my watch and realised we’d better head home, the freeway would be busy and I didn’t want to make the return trip to Melbourne in the dark.

Eventually we got back to the property and on the track to the house we saw clusters of field mushrooms. We got out to pick these little treasures and decided to walk the rest of the way.

In the distance we saw a flicker of movement, a wallaby tentatively looking at us. Kristin said to talk quietly and slowly walk toward the animal, nothing had harmed them recently so they were quite tame. It was quite an amazing experience to be this close to a wild creature so I took one more step, but that was too close, and the wallaby bounded away.

It was beginning to rain, the light was fading and it really was now time to hit the road. Reluctantly we said our goodbyes but made plans to return soon.

Aden and Kristen seemed so relaxed and happy in their hidden sanctuary and I began to think it wouldn’t be long before the temptation to stay would be too great. Kristen said their reluctant departures were getting later and later. I could imagine getting a phone call in the not too distant future to say that finally the country house had won.

Thanks Kristen and Aden, it was a brilliant weekend, your place was amazing and you were such generous hosts…farm life really suits you. Perhaps that phone call will come sooner than I thought!

Have you made the move to the country? Drop me a line I’d love to hear your story.

Thanks for reading, cheers Anna x