Finally…. I make it to America!

It’s 3am Monday morning, I’ve hardly slept, have a plane to catch and might as well get up. It’s a very long way from Melbourne to my sisters place in The Hampton’s on the East Coast of America. I will fly from Melbourne to Sydney, then L.A., then New York and finish with two trains, to reach my final destination… thousands of miles away and about 30 hours later.

My husband drives me to the airport and after checking in, have an hour to wait before my 6am flight to Sydney. I’m flying Qantas and appreciate the higher level of service…hot breakfast, real coffee and smiling staff. It’s a pleasant change from the budget, no frills airlines I usually take. After one and a half hours I arrive in Sydney, still in Australia, but at long last on my way to see my little sister in America.

I take the bus to the international terminal, clear customs and wait.

I have 2 hours to kill and wander the terminal looking for  someone to help set up my phone for use in the States. My service provider tells me I’d be crazy using them as it would be far too costly. She suggests I buy a Sim card from the news agent. The news agent tells me I’d be far better off purchasing a card when I arrive in America as they’re much cheaper there. I’m glad they’ve been honest about the cost but a little unsettled that I’m leaving Australia with no means of contacting my sister, Jane, when I arrive. I text her and make a plan. She’ll track my flight and turn up at West Hampton station to meet the 2 possible trains I’ll need to catch to get from New York to her.

Finally we board at 9.30 am. I turn off my phone, take the blankets and pillows out of the wrapping and make myself comfortable for the grueling 15 hour flight ahead. I’ve been up for six and a half hours and try to fool myself into thinking that I might (for the first time ever) get some sleep.

Dinner is served, blinds are shut and we’re all trying to pretend it’s night time. I watch crappy movies, catch up on a bit of reality T.V., read…but don’t sleep a wink.

After 13 hours breakfast is served, my eyes are burning and the sun is rising. By the time we land in LA I’ve been traveling for 21 hours, without sleep and somehow it’s still 9.30 Monday morning…I have no concept of time.

As I stand in the long queue to clear customs I spot Cameron Diaz… apparently she was on the same flight. I imagine she got to travel first class, with a flat-bed, soft pyjamas and a good nights sleep. Unlike my heroine, Christina Maxwell and Cameron, it will be a very long time before I get to turn left on a plane! But like me Cameron must also smile at the auto check-in camera, look awful  and then come under the scrutiny of the humorless border protection officers who makes us all feel like a criminal…although I do look like a deranged escapee after that grueling flight.

I imagine Cameron is getting off here, her limo parked outside for the short drive home to her fabulous home in Beverly Hills. I, on the other hand, run to the domestic terminal to catch the final flight of this arduous journey!

And just make it on time to board the plane to New York. It’s Qantas again, the service and the food is great, but the 5 hour, sleepless flight is hellish… I just can’t nod off on planes. We arrive at J.F.K. late in the afternoon. I’ve bussed it between terminals, taken 3 flights, crossed datelines, changed time zones, been without sleep for 28 hours, it’s still Monday and my journey is not yet done…2 more trains to go!

I have only carry-on luggage, so my exit from the airport is easy…if I’m quick I might just make the early train!

I have to catch the Air Train to Jamaica Station then change to the Long Island Rail service a few minutes away. I follow the arrows to the other side of the airport and take the lift. Within seconds the train arrives and I jump on. No fare at this end, you pay when you exit. It’s a short trip, one stop. I get out but have no idea how to purchase a ticket…all the machines say no cash, multi-fare, weekly, cards only…my brain just isn’t working and I’m traveling alone with no one to think for me! I need to buy an exit pass and new ticket before I can move through the turnstiles and change platforms to catch the Long Island Rail to West Hampton. I know my train is leaving in 5 minutes and begin to think I’ll never get out of the station…. until a gorgeous woman senses my panic, finds a machine that takes cash and helps me buy a pass and a single journey ticket. She tells me that if I run I might just make the West Hampton train on platform six. I run, fly down the stairs only to realise it’s the wrong platform! I look across the tracks to see my train just pulling away! 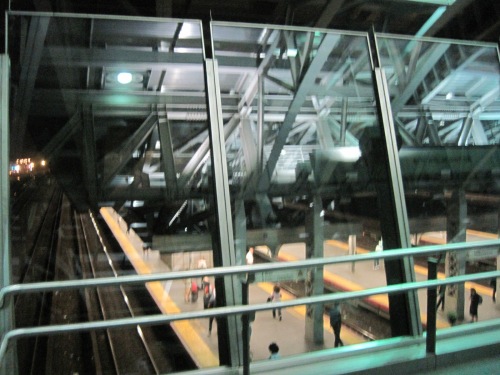 The next train doesn’t leave for ages, I have two and a half hours to kill. I’m nearly delirious with tiredness and have no way to tell Jane of the delay. The station wifi won’t let me in and there are absolutely no pay phones. Perhaps I can find something on the street. I stumble past greasy takeaways and payday loan joints, but no phone shops.

I give up and pass time by walking the length of the station, changing seats, sitting, standing…anything to keep awake, anxious not to miss my ride, until finally…the train arrives. Now I only have to remain alert enough to get off at the right stop!

I do and 1.5 hours later I make it to West Hampton to see my sister standing on the platform. Excitedly we greet each other, jump in her car and head home. Suddenly the tiredness and the 32 hours without sleep seem to disappear.

Wide awake now, in desperate need of fresh air and with two years of gossip to catch up on, we go for a walk along the beach. 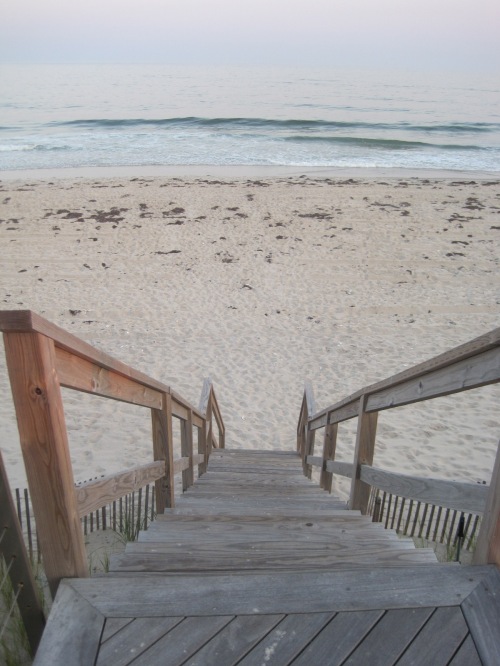 It’s quite late and we’re both hungry. I think my last meal was a light snack, at some abstract time, on a plane flying somewhere across America. I wait on the top of the stairs while Jane puts together something to eat. It seems surreal to be sitting here, so far away from home. 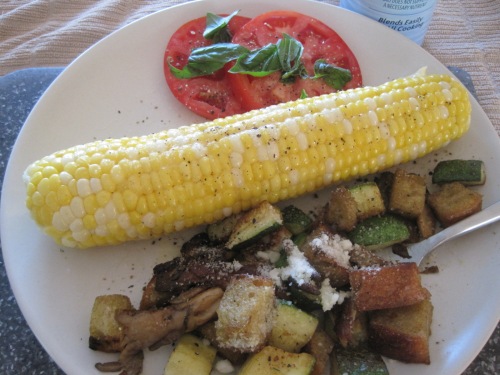 Jane prepares a simple, yet delicious, meal of juicy corn, ripe tomatoes and a zucchini salad.

It’s a hot steamy night and we make light work of the cold beer. I can’t believe I’m finally here!

By sunset I finally crawl into bed, lie flat and fall into a most delicious, deep and much needed sleep.

6 responses to “Finally…. I make it to America!”